There is some confusion about Campagna.  There is a province near Naples called Campagna, but there is also a city of Campagna, so I hope this clears things up for everyone.

During the past 20 years, I collected pages of Naimoli's out of telephone books all over the country.  I accumulated approximately 90 names and addresses.  In 1995, I planned a trip to Italy to trace our roots.  Before I went, I sent letters to all 90 people.  I received lots of calls and information.  There is a small group of Naimoli's in the New York/Long Island area and quite a lot in the Philadelphia area.  Although we are all probably distantly related, there is no current connection during the last 100 years.  The connection must therefore, go back even farther, which I have been unable to trace at this time.

One of the people who contacted me was Anthony Naimoli of Plainview (Long Island), New York.  He had a book, published in 1894 titled:  Citizens of Campagna / History of Campagna.  He was kind enough to let me borrow it.  It had quite a lot of information relating to NAIMOLI.  I will be placing excerpts of this book on this web site as soon as I can.

At any rate, my wife Kim and I went to Italy in May of 1995.  My cousin, Connie Naimoli Ferrante, said our family originated in Eboli, which is, by the way, about 20 minutes from Campagna.  So, our first stop was Eboli.  When we arrived, we went to the local town hall and started going through the birth, marriage and death records.  Although we did find some records, we didn't feel like we were getting anywhere and of course, the language barrier made things difficult.   We went to the local town square and looked for some teenagers, thinking they would know some English.  School was not in session so we found a group of teenagers and although we all had fun chatting with them, our mission was a little too complicated for them to assist us to the degree we required.  However, they took us to their school and introduced us to their English teacher, Luigi Gatto.  Luigi, very kindly, volunteered to take us to Campagna and the municipio or town hall.

The entrance to Campagna was quite beautiful.  I lost my pictures and as soon as I can get new ones, I will place them here.  At any rate, we entered through what appeared to be an open market area where many vendors were selling all kinds of produce and other products.  (Fortunately there were no vendors selling Gucci and Rolex knock-offs!)  The streets were narrow and paved with cobblestone.  We went to the church but their records were in storage due to a renovation project of their archives.

We were told that a number of the dockets were destroyed during World War II and during an earthquake in the 1980's.  However, there were plenty to go through.  The dockets were stored in a rather small room with one desk, two chairs and a light bulb hanging from the ceiling - barely enough room for two people.

While Kim scouted the city, Luigi and I started pouring through the dockets:  birth, marriage and death, not in any particular order, as the dockets were kind of spread haphazardly all over the place.

In the book Citizens of Campagna / History of Campagna, our name was spelled Naymoli, so we were on the lookout for both spellings.  I was quite pleased to find a birth record of an Enrique Naimoli, whose father's name was spelled Naymoli.  That, at least, was proof that somewhere along the line, the spelling changed from Naymoli to Naimoli.  During our research, we continued to find both spellings.  We found numerous entries and some of these are listed at this link:   Campagna Dockets.

Luigi came back with us the second day.  We drove him back to Eboli and returned to Campagna after lunch with Luigi and his wife, and continued digging.  We spent a total of five days researching the records.  On the last day, I was getting nervous as I still did not find any information on MY family.  I frantically poured through as many dockets as I could and when it was almost time to leave, I found a marriage record of my great-great grandparents, Costentino and Faustina Naimoli in 1853!

Unfortunately, my quest is incomplete as there is more research to undertake.  We will return one day and finish with the municipio and hopefully research the church records.  Luigi seems to think that we may find much more in the church archives.

Meanwhile, on one of Kim's sojourns through the city, she visited a book store.  She found a marvelous book titled IL BRIGANTAGGIO NELLA PROVINCIA DI SALERNO (Circondario di Campagna).  Brigantaggio translates to:  A robber or bandit, especially one of an outlaw band.  My best shot at a translation of the title is:  Banditry or Robbery in the Province of Salerno.  There are numerous mention of Naimoli's in the book.  However, I don't believe the references are as bandits or outlaws but rather as property owners as many of the Naimoli's were sindaci's (mayors) of Campagna.  (I was hoping to find a Naimoli outlaw or two!  After all, every family should have a black sheep!)

Please email me with any geneological information and I will post it to future revisions.  Please provide your parents names, birthplaces, date of death, their parents info and as much information you have on grand and great grandparents you have.

This is me! Captain Steven P. Naimoli 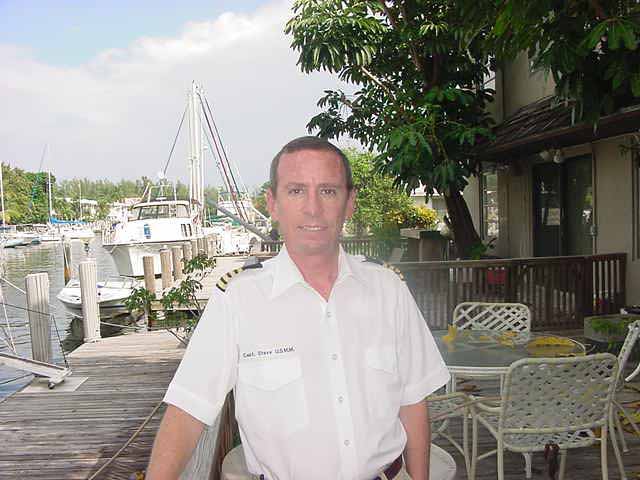